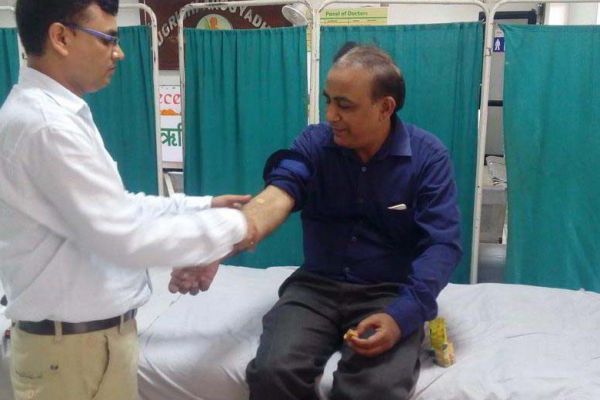 It was a unique opportunity for the donors to donate their blood to save a life.  In this camp approx. 100 donors donated their blood.  After donating the Blood, the Donors were given refreshment, a Donor’s certificate by the Pitampura Blood Bank and Vishwa Jagriti Mission International Youth Wing.  Lot of efforts for making this camp a success were put in by Dr. Arun Raghav, Shri Pawan Gaur, Shri Mithilesh and the team of Karuna Sindhu Hospital.  A small box of Ayushmaan Choco, a product of Yugrishi Global Healthcare Foundation was also presented to the Donors by the Office Bearers and Volunteers of International Youth Camp.  At the time of conclusion of this Camp, a small memento was also offered to the team of Pitampura Blood Bank.

This camp was very much appreciated by Param Pujya Shri Sudhanshuji Maharaj and he also directed the Youth Wing to organize such type of Blood Camps in future also.

Posted 3 months ago by Administrator

No comments yet! Why don't you be the first?